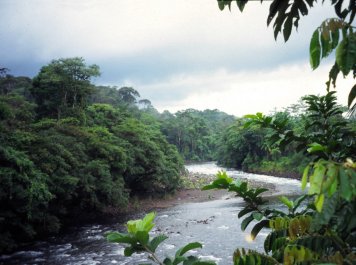 Copious rainfall has endowed Costa Rica with an abundance of rivers, but surprisingly, there are very few lakes. Nearly all the country’s rivers begin in the mountains, where many are frothy white water routes perfect for rafting and kayaking. Once those rivers flow into the lowlands, however, they become languid waterways, many of which are lined with verdant walls of vegetation. Those lowland rivers are excellent routes for trips in small boats, which allow passengers to observe some of the local flora and fauna. The seasonal lake of Cano Negro is also an excellent spot for wildlife watching, whereas larger Lake Arenal is a popular windsurfing spot.

A trip down one of Costa Rica’s lowland rivers, either in a small boat or rubber raft, can be an excellent way to observe some of the country’s extraordinary wildlife. The trees that line most river banks may hold lounging iguanas, troops of monkeys and such birds as ospreys, anhingas, colorful kingfishers, several species of herons and tiny mangrove swallows. Boat trips are offered on such lowland rivers as the Sarapiqui, San Carlos and Rio Frio, in the Northern Zone, and the Tempisque, Bebedero and Corobici, in the Northwest.

Many years ago, when highways did not exist, the only way to journey through Central America was via the Río Sarapiquí. The enchanting scenery along its banks is a delight for those who want to get close to nature. The Sarapiquí runs through 84 kilometers of diverse landscapes, and is a good place to see birds, monkeys, turtles, caimans and more. The river has become a tourist destination for nature- and wildlife-watchers, and allows visits to the Río San Juan, Barra del Colorado and Tortuguero.

At 152 kilometers long, the Reventazón features stretches perfect for rafting, fishing or canoeing. The thick greenery on the river’s banks adds to the enjoyment of a trip down its waters. The mid zone of this river is the Cachí Hydroelectric Plant’s largest water supply source.

The Tempisque unites to the certain beauty that gives to the landscape, its historical importance as main guanacaste «highway»; but, also, its current value is incalculable, because its waters contribute to alleviate the penuries of farmers that need to irrigate their lands.

Flowing out of the Cordillera de Talamanca, this river is world famous among rafting fans and experts. This lush tropical river is considered one of the most beautiful in the world for enjoying whitewater activities. The Pacuare is rated class III-IV on the international whitewater scale. Those running it can enjoy waterfalls and tributaries complemented by the luxuriant and always green vegetation that adds so much value to the trip.

Located a few kilometers from the city of Cañas, this beautiful river can be run in rafts. Its Class I and II rapids are suitable for anyone wanting to take the trip featuring lovely river scenery and observation of birds such as herons and toucans. The Corobicí is one of the only rivers in the entire region with rapids.

Actually the reservoir for the country’s most important hydroelectric project, Lake Arenal is a vast body of water surrounded by rolling hills that hold pastures and patches of forest. Towering over the lake’s eastern end is the conical form of Arenal Volcano, which regularly erupts spewing streams of lava and great clouds of ash. Though everyone who drives around the lake is impressed by the scenery, Arenal is especially popular with fishermen and windsurfers. The anglers are drawn there by the guapote, or rainbow bass, a feisty fish that thrives in the lake’s waters. The windsurfers gather at the western end of Lake Arenal, where strong and consistent winds making it one of the world’s premier windsurfing spots.

Caño Negro, a shallow, seasonal lake near the country’s northern border, is a bird watchers paradise during the second half of the year, when great flocks of ducks, herons and other waterfowl gather there. Cano Negro has been designated a wetland of international importance under the RAMSAR convention. Representations of Caño negro on most maps are actually misleading, since they show the lake’s extension at the height of the rainy season. Once the rains die down in December, the lake rapidly shrinks, and by February it disappears completely, and most of the waterfowl has moved onto the Rio Frio — the river that Caño Negro drains into. The river trip on the Rio Frio, which is the most common way of reaching Caño Negro, is consequently often more nteresting that actually visiting the lake.

The most popular lowland waterway trip heads up the Caribbean Canals, which run along the Atlantic coast north from the port of Moin to the communities of Parismina, Tortuguero, and Barra del Colorado. Most travelers head to Tortuguero National Park, which protects an important sea turtle nesting beach and vast expanses of lowland rainforest and swampy yolillal palm forests. A trip down any stretch of the canals is a true jungle adventure, offering opportunities to spot such animals as crocodiles, three-toed sloths, oropendolas and boat billed herons. They also offer world-class fishing for tarpon, snook and other species.

Protected by the Barra del Colorado National Wildlife Refuge, this navigable river’s watershed is abundant in breathtakingly beautiful natural places. The Colorado is famous worldwide for its magnificent sport-fishing; tarpon and other fish (bass and mackerel) inhabit its waters.

One of the region’s most stunning tours, the Río Celeste trip cannot be missed. A combination of adventure, nature-watching and geological features, the voyage includes a visit to a place called Teñidero (“Dyer’s Shop”), where the clear waters are naturally “dyed” turquoise-blue, as well as a hike and a tour through the forest leading to the extraordinary Celeste waterfall, which, like the river, offers spectacular scenery.

This river runs 148 kilometers, 60 of which are navigable. Historically, neighboring communities have benefited from economic activities made possible by the river; currently, however, tourism has become an important source of income. Beautiful trips such as Boca Tapada–Río San Juan allow visitors to view natural landscapes, birds, caimans, crocodiles, river communities and more.